The art of food, painting, pottery… 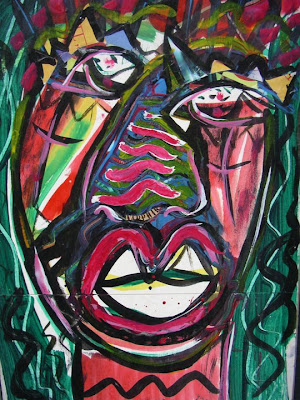 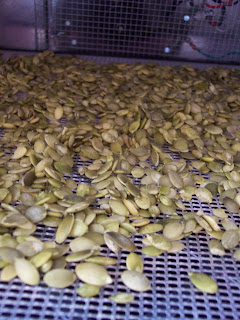 After soaking pumpkin seeds and sunflower seeds over night I went to work making cheese and yogurt from the combination. A separate bowl full of pepitas (pumpkin seeds) took over a tray in the dehydrator that will be used for snacks and as an ingredient in granola. 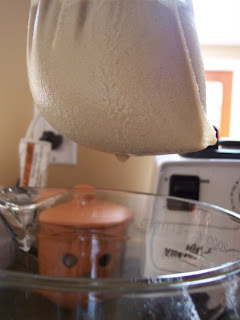 'Hang in a cheese bag, over a bowl, the blended mixture of water, probiotic and seeds. That will allow the excess water to drip away.'

The video by Dan shows how to prepare the cheese and the yogurt. The only change I made was to use human milk cultured probiotic 'HMF Forte' by Genestra. Dan says he is making cheese from nuts and seeds however he used only seeds. What a super taste from the combo of sunflower and pumpkin! 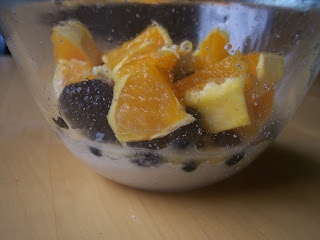 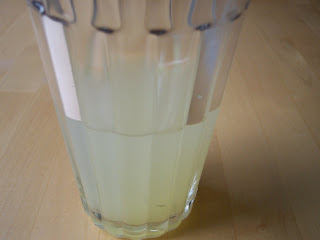 Breakfast at 2:30 PM at which time I realized I had started to prepare breakfast much earlier and had gotten easily distracted with doing other interesting things, forgetting to eat.

Breakfast was some of the freshly made seed yogurt with blueberries, blackberries and orange pieces. I love the taste of the yogurt and the combo of the fruit with it.
I drank a glass of freshly squeezed lemon juice mixed with a fresh batch of rejuvelac. MMMMMMM!!

Last night flax seeds soaked which are now dehydrating to form crackers. More will be added about them tomorrow.

At some point in the late afternoon I ate a couple of bosc pears with more than usual amount of pecan nuts. I finished all the pecans I have on hand so really need to get an order in this week.

I found some agave syrup in my cupboard; it went to the garbage. It was outdated but that wasn't the reason it was tossed out. I never felt good on agave and found out it isn't even the raw food it was made out to be. I am experimenting with coconut crystals and they too don't seem to be up to par. 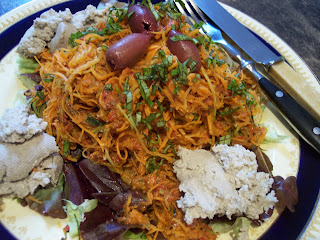 Between 6:00 PM and 6:30 PM my stomach requested food. My refrigerator has a nice selection of food items pretty much at all times. There was enough mariana sauce to mix with yam angel hair noodles and zucchini angel hair noodles, which I freshly spun through one the veggies noodle makers. The mixture was placed on a bed of red lettuce topped with olives and chopped fresh basil. Some of the cheese that is still fermenting was added and whoa…. 'Delicious'.

Oh and right when I was heading to bed I stopped in the kitchen to eat a weensy bit more of the seed yogurt(guess what I am having for breakfast… yep) :), spotted the two ripe mangos atop the counter right beside me and ate one of them, as well. I really do think rejuvelac speeds my metabolism and gets me wanting more to eat.
P.S.-- I didn't feel the best this morning after eating the pistachios so close to retiring for the night. Not the time to eat such a rich nut, actually any nuts! A reminder how well I do when I only eat fresh fruit after 8:00 PM. A tidbit I picked up from Natural Hygienists, years ago, that I have found to be a good idea. 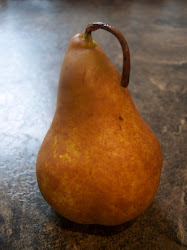